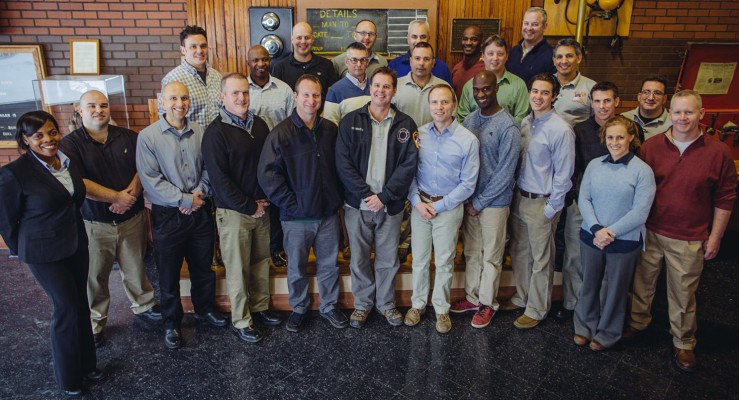 The Leary Firefighters Foundation (LFF) has joined with MCS to champion and fund a long-term leader development initiative, agreeing to sponsor MCS leadership programs for firefighters and emergency responders. For the first program, 24 participants from the fire departments of New York (FDNY), Boston, and Worcester, Massachusetts, attended At the Point of the Spear: Fire Service Leadership during the week of 26 January 2015. This pilot was hosted by FDNY at the department’s training academy located on Randall’s Island, New York.

The brainchild of FDNY’s Chief of Probationary Firefighter training Chief David Morkal, the initiative is intended to provide participating agencies with a means to increase leader alignment and strengthen operational culture. In addition, the multi-agency aspect of the program affords participants the opportunity to share valuable leadership lessons with professionals outside of their agency or department, lessons that can then be taken back and shared at their home units.

Actor Denis Leary established the Leary Firefighters Foundation in the spring of 2000 after a fire in his hometown of Worcester claimed the lives of six firefighters the previous December. One of those firefighters, Lt. Tommy Spencer, was Leary’s childhood friend and high school classmate. Another, Jerry Lucey, was his cousin. The intent of the foundation is to assist fire departments to better serve their communities while increasing firefighter safety.

The response to the pilot course in New York was overwhelmingly positive. Funding for the next course has already been secured with a target date for delivery in the spring of 2015 in Boston. Participants for the upcoming course include representatives from the three departments that participated in the pilot as well as those from other departments that have communicated interest.